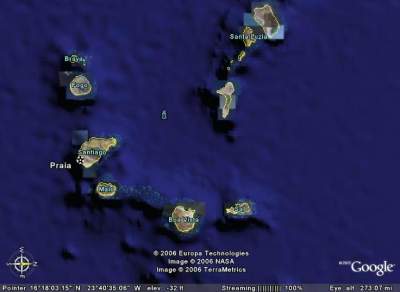 Cape Verde Islands is an archipelago comprising ten islands – some mountainous, some flat and sandy – in the middle of the Atlantic Ocean. They are the next group of Islands below the Canary Islands

Boavista Island are The Caribbean Islands on the wrong side of the Atlantic and as undeveloped as Lanzarote was 30 years ago.

Similar to the “flat” islands of Sal and Maio, the climate and countryside of Boavista is also heavily affected by the dry, hot winds blowing from the Sahara.

Brava Island  perhaps the most beautiful of Cape Verde’s ten islands. Cape Verdeans call Brava, “the island of flowers.” But this entirely misses the point of Brava’s beauty

Fogo Island Capital of Fogo Island is Sao Filipe and it is a wonderful colonial town filled with charming old buildings built by the Portugese. These colourful buildings are remnants of Cape Verde’s colonial past offer a sense of grandeur to Fogo Island.

Maio Island Cape Verde belongs to the leeward group of islands and is located south of Boavista and about 25 km east of Santiago. Santana Bay attracts nesting sea turtles

Sal Island is a great place to visit if you like a relaxing beach holiday, sunbathing and watersports such as Diving, windsurfing, surfing and fishing.

Santiago Island is the largest agricultural centre of all the Cape Verde islands and is home to half of Cape Verde’s population.

Sao Nicolau Island Sao Nicolau’s main town is Ribeira Brava and Tarrafal which hosts Sao Nicolau’s ferry and the fishing port Located on the eastern side of Monte Gordo, Cachaço

Sao Vicente Island provides beaches for soaking up the guaranteed sunshine, water conditions that are perfect for wind surfing, eighteen hole course for golfers and beautiful old towns and villages

Hosted by Tim Reid. Highlights some of the historical and cultural locations in Cape Verde.

The popularity of Cape Verde Islands as a holiday destination looks set to increase .

Cape Verde Islands to within six hours of  the UK, leading some to tip it as the new Caribbean.

is an archipelago comprising ten islands – some mountainous, some flat and sandy – in the middle of the Atlantic Ocean. They are the next group of Islands below the Canary Islands,

It is, however, a relatively new holiday destination for discerning travellers  – but has only previously been accessible by air via southern European or African airports, or by sea.

Located on the beautiful coastline of Senegal, the Cape Verde islands offer undiscovered nightlife, a vibrant culture and stunning coastlines. The area’s major towns are an attractive lure for many, with destinations such as Praia and Santiago offering bustling metropolises that offer cuisines from the region’s homegrown beans, sweet potatoes and sugar cane.

Visitors can also find a good nightlife here, with restaurants and live music available until the early hours.Flight stats for Cape Verde Islands – did you know?

Mindelo • Sao-Vincente Island
Located in the centre of the historic Mindelo, this Portuguese-style guest house has a rooftop terrace with an outdoor lounge. It is just a 10-minute walk from Laginha beach. More

Cape Verde’s International Airport, Amílcar Cabral, is located on the island of Sal, with direct flights from numerous major European cities such as Paris, Lisbon, Amsterdam and Las Palmas, travelling to this ‘corner of paradise’ is becoming increasingly easier and convenient.

Internal Flights:
Once on The Cape Verde Islands, travelling from one island to another is best done through internal flights.

The country’s national airline, TACV, offers daily flights to all of the inhabited islands apart from Brava and Santo Antao, which are only accessible by boat. Passengers also travelling internationally with TACV will qualify for an ‘internal air-pass’ entitling them to reduced fares on pre-booked internal flights.

For those travelling in groups between islands, private air charters are available through ‘Cape Verde Express’ air taxi service. Although usually a more expensive option, the in-transit views are unbeatable.

The islands of Mindelo, Sao Vicente, Santo Antao, Santiago, Fogo and Brava are all linked through two well-established cargo-passenger ferry services. These services are frequent and reliable, but most travellers still favour the quicker, hassle-free option of internal flights, leaving the ferries to play a more major role in industry rather than tourism.

When travelling by road, there are several different options available. Firstly, for those wishing to truly explore, car hire is readily available on the islands of Santiago, Fogo, Sao Vicente and Sal. But be aware – only one-third or the country’s roads are paved, so driving in remote areas can be somewhat of an ‘adventure’! Vehicles drive on the right-hand side of the road and an International Driving Licence is required.

The second option is to travel by taxi, known as ‘Aluguer’. This is probably the most popular way of getting around and these vehicles vary in size and shape – from cars to pick-ups, vans to minibuses. It is common practice to negotiate the price of a journey before setting off.

Finally, public buses are a reliable, inexpensive way of getting around. The cleanliness of the buses is of a surprisingly high standard, particularly in larger towns.

CLIMATE The climate as a whole is classed as dry tropical with an average temperature ranging between 21C to 31C with water temperatures between 22C and 27C.

Daily sunshine averages 6 to 7 hours between August and October and 10 to 12 hours for the rest of the year.

Wind speed averages 13 knots between November and July, dropping to 9 knots in the summer and annual rainfall averages to around 10 inches, mostly falling over the higher ground.

There is a significant contrast in climate between the mountainous regions, which are cooler and wetter, to the warm, dry climate on the coast. Sal and Boa Vista are particularly dry, unlike the Caribbean there are no hurricanes.

No vaccinations are required for entry to Cape Verde. It is not recommended to drink the tap water; mineral water is in plentiful supply. Tourists receive free hospital treatment in general hospitals on presentation of their passports, but private health insurance is strongly advised. There is a new hospital and new private health clinics being built on Sal

Food and Drink on the Islands

A mix of African and Portuguese cultures has had a large impact on the food of Cape Verde. Many different ingredients are used in the preparation of dishes resulting in very delicious tastes. As well as very traditional food, there are also many restaurants across Cape Verde who specialize in international dishes.

Cape Verde Islands has a huge variety of fresh fish and seafood, tuna fish is readily available and is the most consumed by the local Capeverdeans. These are the other main types of seafood available on Cape Verde Islands, lobster, squid, rock barnacle and many other kinds of shellfish.

Cachupa is a great national dish and is the most famous dish from Cape Verde.Islands Cachupa is made from corn, a selection of meats, variety of beans, vegetables like sweet potatoes, manioc, cabbage, squash, and different types of sausages. Cachupa is also often made with fresh tuna.

Drinking tea’s are very popular in Cape Verde Islands and are usually accompanied by pastries like cuscus or corn paddies. These are eaten with different locally made fruit jams which are usually papaya, red currant, coconut.