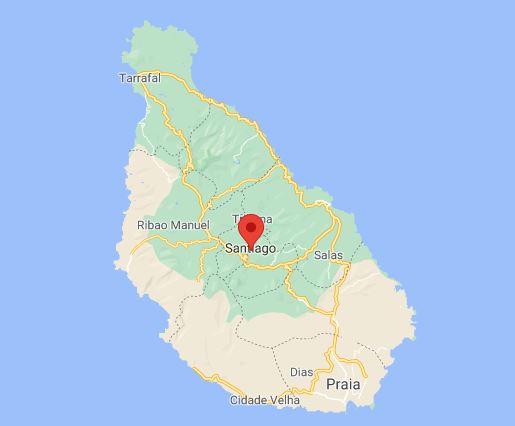 Santiago Island is the largest agricultural centre of all the Cape Verde islands and is home to half of Cape Verde’s population.

Santiago can be found between the islands of Maio and Fogo and is one of the Sotavento islands.

Santiago was the first town of all the islands and the town of Cidade Velha was founded as Riberia Grande in 1462.

This is the home to the Cape Verde’s capital city of Praia and also has one of the islands two international airports.

Santiago’s population has doubled since the independence of Cape Verde in 1975. Along with Santiago other towns on the island are Assomada and Tarrafal.

The main source of employment for the people of the island are agriculture, tourism and fishing. The main agricultural products are corn, sugar cane, banana, coffee and mangoes.

Santiago was discovered by António da Noli in around 1460 and built a garrison in Cidade Velha which was known as Ribeira Grande.

The Crioulos on the island are the oldest African-European community in colonial history.

The local creole language, which is called Crioulo de Santiago, has became a separate language.

During the slave trade Cidade Velha was the second richest city in the Portuguese empire.

Portugal was unable to defend its colonies as the English, Dutch, French and Spanish took over the slave trade and the island was later raided by pirates.

The island population were overlooked by the Portuguese colonial system and Santiago was a strong supporter of Amilcar Cabral and the African Party for the Independence of Guinea and Cape Verde and the independence of 1975.

Santiago has often hosted conferences on Creole culture and maintaining it. See history for more information.

Since the independence of Cape Verde, infrastructure has improved especially schools, shipping ports, airports, roads, and much more.

This event is not only a festival of music but also serves as a celebration of culture and the Creole heritage of Praia itself, so it is a wonderful opportunity to get a true feel of the city and its people.

Throughout the course of the festival visitors can enjoy a selection of concerts and performances by a mixture of local musicians and international acts.

One of the organiser’s aims is to promote Creole music from all over the world, so the festival hosts performers from areas such as the Caribbean, the Indian Ocean and Africa.

Praia is home to the oldest version of a Creole language still spoken today, and so is a perfect location for a celebration like this and a great place to experience these cultures.

The festival has plenty of other exciting things to offer as well as music. A range of workshops, documentary showings and lectures are available for visitors, and it is even possible to take part in a jam session and make some jazz music yourself.

With flights to the area from the United Kingdom taking only a few hours, the Kriol Jazz Festival is a perfect place to experience a variety of new cultures and a fascinating city and area. It is a great event for anyone who enjoys good music and exploring heritage.

Praia, the capital of Cape Verde is situated on the island of Santiago.

Location in Santiago Island:
In the middle of the leeward group of islands with a surface area of 991 Km2, Santiago is the biggest island in the archipelago.

In the north/south direction, its longest point is 55 Km and from east to west, 29 Km. Of volcanic origin, the highest point of its mountainous peaks is called Pico de Antonio, with an altitude of 1392m.

The deep and beautiful valleys, the result of hundreds of years of erosion, offer excellent agricultural conditions and the view of these regions from above is truly breathtaking.

There is a great contrast between the vegetation and the mild and humid climate of the higher regions and that of some lower regions, which are very dry and arid.

History of Santiago Island:
Santiago was the first island to be populated after the Portuguese discovery of Cape Verde in the 14th century.

The economy of the island was developed mainly through the use of African slave labour, and as a result became a commercial trading post with the African Continent and naturally assimilated more of the African influence than the rest of the islands.

Pirate attacks were frequent on the old capital town of Ribeira Grande. In 1583, it was also attacked by forces supporting the Prior of Crato, in the battle for the succession to the throne of Portugal; and the French pirate J.Cassard finally devasted the town in 1712. It was from this point on that Praia assumed predominance and today remains the capital of the Republic.

Agriculture and fishing are still the principal industries of Santiago. The island is full of beautiful scenery, charming beaches and living examples of its historical past.

Located in Praia, 2.5 km from Praia de Gamboa, Maresia Guest House offers beachfront accommodation and various facilities, such as barbecue facilities. All rooms feature a kitchen and a private bathroom. The accommodation provides a 24-hour front desk, airport transfers, a shared lounge and free WiFi throughout the property.

Do you have a Vacation Home you wish to rent out on any of the Cape Verde Islands?https://takeabreakholidays.com/africa/cape-verde-islands/