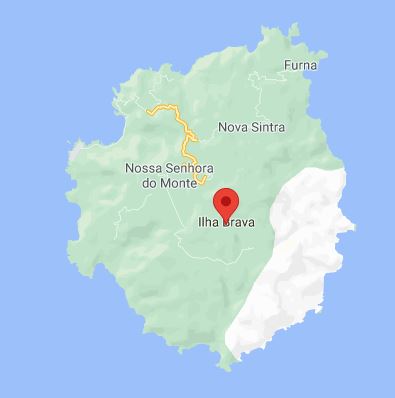 Brava Island  perhaps the most beautiful of Cape Verde’s ten islands. Cape Verdeans call Brava, “the island of flowers.” But this entirely misses the point of Brava’s beauty

Jan 2021 Brava is one of the smaller and least visited of the Cape Verde islands.
However, it is lovely and well worth a visit.

Nova Sintra on Brava Island Cape VerdeThe Island of Brava is perhaps the most beautiful of Cape Verde’s ten islands. Cape Verdeans call Brava, “the island of flowers.” But this entirely misses the point of Brava’s beauty.

Brava Island Cape Verde is a magical place. Before the arrival of the Cabo Verde Fast Ferry which now provides daily service to the island, Brava and its 6,000 residents were virtually cut off from the rest of Cape Verde, and by extension, the rest of the world.

It is no surprise then that going to Brava is like a journey back in time to a period when life was simpler, to a place where you walk along narrow, country lanes lined with beautiful flowers. You won’t find airports, shopping malls or hotels here.

plants
When you arrive at the small port town of Furna on the ferry, your first thought is whether anyone actually lives here. That’s because the principal town of Nova Sintra is a 10 km climb from the port up into the mountains where Nova Sintra is nestled. Make sure you catch one of the Hiaces (mini-vans) which will transport you up the steep, winding road to Nova Sintra. Its not a journey you’ll want to do on foot.

The ferry gets in at night so you may not have time to explore the port town of Furna. It’s actually more lively that the capital, so if you get here on a weekend, perhaps you can check out the local tavern before heading up to Nova Sintra. I stayed at the quaint inn, Pensão Castelo (Eugenia 238-982-5786) in Nova Sintra. The room was spartan but clean and inviting. And it was a good base from which to explore Nova Sintra and the rest of the island, like the picturesque fishing village of Fajã d’Agua.

Picturesque Fajã d’AguaFajã d’Agua, is located in a beautiful setting – a wide bay at the foot of tree-covered slopes. It’s a “must visit” if you spend even a day in Brava. A small cruise ship came into the bay on the day I visited Fajã d’Agua.

I knew the place was in demand because there is no port in this village where large boats can dock. Instead, the visitors came ashore aboard small pirogues. Obviously, they really want to see this place … or they would have stayed on the ship.

Be sure to visit the other side of the bay where there is a natural pool between the steep cliffs. There’s a well-maintained, safe path where you can walk down to the pool.

Loto
Lota at the Coqueiro Bar The town has one cool bar, the Coqueiro, and an equally cool bartender, Lota.

It’s the place to get a well deserved drink after you’ve checked out the town.

While you are sitting there having a drink, keep an eye out for the “old dancer” … he is a crusty old fisherman with impish eyes. In order to actually see him, you must ask Lota to turn the music up.

Whenever this “old dancer” hears music, he comes to the front of the bar and dances and mimes the music. He is actually mentally unstable. LOL. But he obviously loves to perform and he is quite entertaining. His name is Lastanha!

Now, to get to Fajã d’Agua, you have to take a Hiace or one of the two taxis on the island. I chose to go by taxi – Gabi’s taxi that is! He is a friendly chap and good company for the trip.

You can contact him at 238-989-8347, especially if you miss the Hiaces from the port at Furna. I guarantee he won’t be too far away at any given moment.

Catia and Sofia – sisters meeting for the first time There is definitely something magical about Brava that’s hard to define.

Here’s another example. It’s the story of Catia and Sofia – two sisters who are now both in there 20s and living in Cape Verde.

Well they may as well have been born in different countries because they had never met … until today.

Catia works at the Fast Ferry company in Santiago.

Sofia walked in to purchase a ticket to Brava.

And just by happenstance, the ticket sales agent notices that Sofia’s father has the same name as one of the employees who works on the port in Brava and wonders if Sofia is related to that port worker.

She replies that they are not related.

But the sales agent notices that Sofia has the same last name as Catia who just happens to be sitting one desk away.

He calls over to Catia and introduces the two women. Sofia mentions that she has a sister she has never met who is also named Catia but that this sister lives in São Vicente, not Santiago.

Catia is stunned, she just arrived in Santiago one month earlier from São Vicente to work at the Fast Ferry company!

Her father was born in Brava. The women compared names of their respective fathers and discover that it is one and the same father … they are long-lost sisters!

And if you aren’t yet convinced about the magic of Brava … just take a day to visit. But first, check out the slideshow below and see if you can spot Brava’s magical cow.

About Brava Island Cape Verde:
The island of Brava is located in the extreme Southeast of the leeward group of the archipelago. With an elliptic configuration, it has a surface area of 64 km2 and a maximum length of 9km from east to west.

Brava is the smallest island of Cape Verde with the exception of the uninhabited Santa Luzia. lt is very mountainous and its highest point is Monte Fontainhas. Deep and abrupt valleys contrast with its high peaks.

Climate for Brava Island Cape Verde:
Due to its altitude, Brava is the wettest and the most green of all the islands and due to its abundance of flowers has earned the nickname “ilha das flores” or the island of flowers. The temperature on average ranges from between 16 to 26°C.

Brava was discovered in 1462 and began to become populated after 1680, largely due to the eruption of the Volcano of Pico on the nearby island of Fogo, causing its inhabitants to relocate.

By the end of the 18th century, American whaleboats started to use the island as a supply-stop in the mid Atlantic. Gradually the local fisherman found work aboard these whaleboats.

But, with unpleasant living conditions on these boats, the Cape Verdeans started to look for jobs on land, mainly in Massachusetts, thus commencing the emigration to the United States of America where still today there is the largest Cape Verdean community abroad.

As a result, English is more widely spoken on Brava and the greater part of commercialized products come from the United States.https://takeabreakholidays.com/africa/cape-verde-islands/