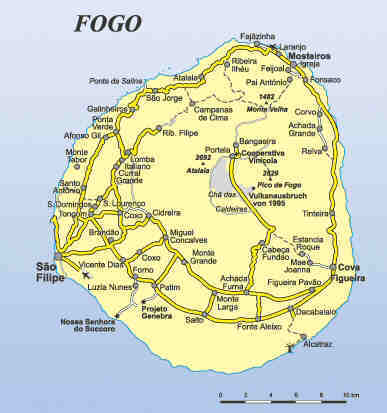 The Grandeur of Fogo Island

Fogo Island Capital of Fogo Island is Sao Filipe and it is a wonderful colonial town filled with charming old buildings built by the Portugese. These colourful buildings are remnants of Cape Verde’s colonial past offer a sense of grandeur to Fogo Island.

Local Fogo Beach
Fogo Island Cape Verde Islands
Fogo means ‘fire’ in Creole and is the appropriate name for this active volcanic island, Its centre is a large volcano which shuddered into life in 1995 when it erupted giving spectacular display of red lava emanating from its tip.

The Capital of Fogo is Sao Filipe and it is a wonderful colonial town filled with charming old buildings built by the Portugese. These colourful buildings are remnants of Cape Verde’s colonial past offer a sense of grandeur to Fogo.

One of the wonders of Fogo Island is its volcano. The drive up to it is remarkable and one can see the craters of eruptions from yesteryear a reminder of just how volatile the volcano is.

The experience is truly inspiring to see such a wonder. The views from the top are awesome and show the history of past volcanic activity, As recent as 1995, the volcano erupted and the vent from its eruption can be seen on the trek to the top.

Away from the volcano, Fogo Island has lush and fertile lands and these are farmed for bananas, oranges and coffee crops. One of the delicacies of Cape Vede is the Fogo coffee.

Interestingly, Fogo is famous in Cape Verde for producing wine. Cha de Fogo wine is very popular with tourists wanting to try the local wine. It is produced in Fogo and can be purchased on many of the other islands.

Fogo has many black sandy beaches and its black stones retain much of the hot sunshine making it one of the hotter islands in the archipelago.

Fogo Island has many day trip excursions going from Sal to see the volcano. On the island itself, there are guided volcano tours by foot or by horseback as well as seeing the locally produced wine and coffee.

Fogo Island has not become one of the main touristic islands of Cape verde, but it does benefit from people visiting the island to see its wonders. Getting to Fogo Island means taking an inter-island flight via TACV and most flights depart Sal, Santiago or Sao Vicente islands.

Fogo is an island that will provide plenty of surprises to visitors.

Fogo Brava is set in São Filipe and has a bar, a shared lounge and a terrace. Among the facilities of this property are a restaurant, a 24-hour front desk and room service, along with free WiFi throughout the property. There is free private parking and the property offers paid airport shuttle service.

Fogo Island was discovered at the same time as Santiago and Maio, on May lst, 1460. At first it was called Sao Filipe but later, and quite appropriately, its name was changed to Fogo, meaning Fire.

The inhabitants of Fogo Island are the only ones to have known only three flags. During Portuguese occupation by Spain between 1530 and 1580, the Spanish flag was raised throughout all Portuguese territories except Fogo, largely due to the strong resistance of the local inhabitants.

Often seen in this island is Funco – a primitive habitation constructed with rocks, forming a circular structure. They are covered by large dried leaves. Fonte Aleixo is a neighborhood which predominantly has these types of homes. Funco symbolizes the most poor in contrast to the “sobrados” (large colonial style homes) normally owned by the wealthy.
Latitude: 14.95N

The island of Fogo west of Santiago, is almost round in shape, and looks as if it is just a volcanic mountain. The surface area is 476 Km2 and, although only the fourth biggest island , it is by far the tallest with the top of the volcano reaching a height of 2829 m.

The volcanic cone rises from a plateau about 8 km in diameter, called Cha das Caldeiras and the walls on the western side reach almost 1000 m and end in a crater 500 meters in diameter and 180 meters deep.

This is regarded by local inhabitants and visitors as truly the most spectacular scenery in the whole of the Archipelago. The original volcanic cone is thought to have at one time, reached a height of 3500 m and was active right up to the 18th century, when the main cone ceased activity. From time to time there have been sporadic eruptions; the last one was in 1951, when the lava poured out of one of the two chimneys on the southern side of the volcano.

Fogo Island Cape Verde has an airport for internal domestic flights. The island also has schools, a gymnasium, banks, a post office and some hotels.

In the Northeast of Fugo Island are woods of Eucalyptus and cool valleys in which grow coffee and vines; the remainder of the Island is fertile and green or dun coloured according to season.

The main town of Sao Filipe is large and attractive with very Portuguese squares, cobbled streets and pastel shaded buildings many covered with bougainvillaea and other greenery with views of neighbouring Brava.

SunOpta Announces the Revival and Upgrading of Fogo-Origin Coffee …
Middle East North Africa Financial Network
The project is to be undertaken on Fogo, one of the islands of the Republic of Cape Verde, named after its volcano. The land is very fertile and is well used…

Sao Filipe is one of the warmest places of Cabo Verde. The highest temperature varies from 28C in January to 32C in September, the lowest temperature from 20C in February to 25C in August. Seasons in the European way don’t exist

The north-eastern part of the island above the village of Mosteiros has nearly a tropical climate due to the humidity of the trade-winds, while the hot and dry south-west allows only poor vegetation.

Of crucial importance is the quantity of rain that falls in August, September and October. If it is too low, the farmers and their families, especially in the middle and southern parts of the island, face severe problems, which can only be alleviated by public resources or international aid programs.

A volcanic – yet tropical – paradise in Fogo Island Cape Verde

The high altitude of Fogo, coupled with the rich and fertile volcanic soil, means that the island is mostly verdant and lush, with copious crops growing there. Famous for its coffee and grapes, there are also endless plantations of mangoes, apples and bananas that flourish in the highlands of Cha das Caldeiras.

Amongst the highlights of the island, which is 476 square kilometres and home to a population of around 38,000, are:

Sao Filipe – the islands capital city and Cape Verdes fourth largest city. Located on the west coast of Fogo, it is a charming city full of remnants of its colonial past. Here, amongst cobbled streets and brightly painted squares you will find many fine examples of the Sobrado architecture brought to the island by the Portuguese. These colonial houses were all built on two storeys, around a shady courtyard off which there were staff quarters and working rooms. From the city you can reach a number of black sandy beaches such as Ponta da Salina and Porto de Vale de Cavaleiros, three kilometres north of Sao Filipe.

Las Salinas – a tiny fishing port near to which there are a number of natural swimming pools carved out of the black volcanic rocks by the sea.

Salina de Sao Jorge – another small village to the north of Sao Filipe where there are some magical natural swimming pools and deserted beaches.

Cha das Caldeiras – a village situated inside a huge crater of the volcano.

Lying at 1700 metres, it has the appearance of a lunar landscape where everything seems to be black – the land, the houses and the sand.

Ironically, the people that live here are the least dark of all the Cape Verde population, with many of the Cha das Caldeiras population having blond hair and blue eyes.

They are said to be the descendants of Duc de Montrand, a Frenchman who settled on Fogo in 1872 and introduced the first vines.

He also laid the road from Sao Felipe to the crater, sank wells and was involved in introducing medicinal herbs.

Vines are still grown in the area, and the village has its own Wine Producing Cooperative Society which is interesting to visit. From here, treks can be taken to other craters higher up, and to the famous Pico de Fogo.

Cova Figueroa – on the eastern side of the island, is a quaint little town with pretty colourful houses. On the terraces surrounding this town you will see wild figs growing.

Getting to Fogo Island

There are daily flights from Praia to Fogoâ€˜s airport at Sao Filipe, as well as regular flights to and from Sao Vicente and Sal. There are also ferries between Praia, Brava and Fogo, which have historically run twice a week. However a new faster service began this year, which operates daily.

The Cape Verdean government is working hard to develop its country as a popular tourist destination and Fogo is very much in its sights as an island worthy of investment. Promotion of tourism on Fogo, specifically focused on its volcano, is one of its principal aims.

To this end investment in the islands infrastructure is currently being sought. The Saudi Development Fund and the Arab Bank for Economic Development of Africa (BADEA) recently announced that they were together planning to fund part of the construction of a ring road on the island.

The road, which is around 80 kilometres long, and expected to cost US$36.13 million, will be 60 per cent funded by the two institutions while the Cape Verdean government will fund the remaining 40 per cent.

A major micro solar and wind power generation project is also underway, to be completed in 2013. Meanwhile, Germany has been involved in a development project to improve and guarantee a supply of drinking water to the population of Fogo.

The principal activity on Fogo is walking, and many visitors come from across the globe to hike up its volcano.

From Cha das Caldeiras, keen hikers can climb to the top of the volcano – Pico de Fogo, which lies at 2829 metres. The climb takes about two and a half to three hours, and is not for the faint hearted! Walkers must be accompanied by guides.