Jerusalem Hotels  Jerusalem is the capital of Israel and, if including the area and population of East Jerusalem, its largest city in both population and area, with a population of 763,800 residents over an area of 125.1 km2 (48.3 sq mi).

Located in the Judean Mountains, between the Mediterranean Sea and the northern edge of the Dead Sea, modern Jerusalem has grown far beyond the boundaries of the Old City.

The Jerusalem Tower Hotel is located in the city centre, in easy walking distance from the major historical and holy sites of the city, as well as shopping and entertainment areas.… More

The modern Jerusalem Gate Hotel is conveniently located at the entrance of the Holy City, within easy walking distance of the central bus station.… More 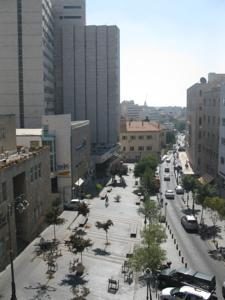 The Caesar Premier Jerusalem Hotel is located right in the heart of the new part of Jerusalem.… More

The hotel is a 30-minute drive from Ben Gurion Airport and less than an hour’s drive to Tel Aviv and the Dead Sea. The old city is within walking distance, and the bus to Jaffa Gate stops right outside the hotel.

Everywhere you look will be a place of ancient worship or importance. In Jerusalem, the winding streets of the Old City are charming, uncomfortably busy during religious festivals, packed with historical sites, bazaars and resident prophets.

In Jerusalem there are many bars and cafes, but not in the most religious areas. The Sultan’s Pool in Jerusalem is a fabulous outdoor venue. You’ll be able to find a lot of beautiful ceramics in the Old City.

During its long history, Jerusalem has been destroyed twice, besieged 23 times, attacked 52 times, and captured and recaptured 44 times.

The oldest part of the city was settled in the 4th millennium BCE, making it one of the oldest cities in the world.

The old walled city, a World Heritage site, has been traditionally divided into four quarters, although the names used today—the Armenian, Christian, Jewish, and Muslim Quarters—were introduced in the early 19th century.

The Old City was nominated for inclusion on the List of World Heritage Sites in danger by Jordan in 1982.