Slovenia Downtown Ljubljana is full of trendy cafes and high-quality restaurants.  You can find local Slovenian food, and restaurants with ethnic food from many places around the world.

To Find the Hotels and Hostels in-Ljubljana CLICK ABOVE. Just over 300 available.

Ljubljana is the capital and largest city of Slovenia.  Located in the middle of a trade route between the northern Adriatic sea and the Danube region, it has been a historical capital of the Carniola, a Slovene-inhabited part of Austria-Hungary and is now the cultural, educational, economic, political and administrative centre of Slovenia, independent since 1991.

Ljubljana has no world-famous attractions, which is just great:  there’s no need to hop from one place to another, taking photos and crossing the items on your checklist.  You have all the time to stroll around and enjoy the city itself.

It is a charming city full of artists, museums, and galleries.  With a population of 300,000, it is one of the smallest capital cities in Europe.

THINGS TO SEE AND DO

The easiest and most pleasant way to reach all spots described below is by foot, except for the Zoo and the Architecture Museum.

Triple Bridge (Tromostovje).  It consists of three separate picturesque bridges located next to one another.  The neighboring Preseren square with the statue of Slovenian greatest poet France Preseren is the central location of downtown Ljubljana and a common meeting point.

Tromostovje (Triple Bridge), a special feature of Ljubljana’s architecture, is made up of an old stone bridge from 1842 and two side ones which architect Jože Plečnik added in 1931; together, they provide an elegant entrance into the Old Town.

Old town, Squeezed between the castle hill and Ljubljanica river is the old town with two squares, Mestni trg (City square) with the Robba fountain and the city hall behind it, and further on, Gornji trg (Upper square).

In the summer, its center hosts a number of city sponsored events, from children workshops and public playgrounds on the streets that get closed for traffic for the occasion, to Trnfest’s off-beat street performances and musical events of all genres.

In autumn it shows its academic face as it fills again by students of the state’s largest university to whom the city owes much of its youthful character. Cold December days are warmed by thousand of lights, the new year’s decoration conceived by local artists.

Ljubljana Castle.  The tower has magnificent views all over the city.  You can also see the Sava River and Kamnik Alps in the distance.

Built in the middle of the 15th century, today it is a popular tourist destination for locals and foreigners also. No wonder. It offers an outstanding view over the city, a romantic athmosphere and a place of numerous cultural event.

Tivoli Park, The main city park.  You can sit down on a park bench and enjoy the sun.

Tivoli City Park (Slovene: Mestni park Tivoli) or simply Tivoli Park (Park Tivoli) is the largest park in Ljubljana, the capital of Slovenia. It is located on the northern outskirts of the Center District,

About Opera and Theatre, shows are performed regularly throughout the year.  The opera house is located just behind the Slovene Parliament.  There are several theatres scattered all over the city centre.

EAT AND DRINK in LJUBLJANA 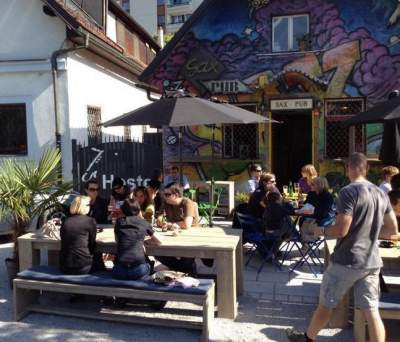 On the other hand, most of Ljubljana’s bars tend to cluster on the streets running parallel to the river, radiating from presemovtrg, which is the main square in Ljubljana.  The more interesting bars tend to be on the backstreets, rather than directly facing the river.  Part of the joy of this city is stumbling across these places, but these are few to start you off.

Also, Ljubljana has several good nightclubs (discotheques).  The clubs hold special events, they will play a certain style of music on certain nights, etc.  Some will also impose a strict dress code and age limits.

Set on the premises of the former arthouse cinema Kinoklub Vič, Cirkus is one the of the more popular clubs in Ljubljana – with lots of themed nights, live DJs and photo albums posted to their Facebook page the morning after parties (ie beware of the man with camera if you don’t want your drunk face making the rounds on social media!). Located just at the edge of the city centre opposite the old tobacco factory, it’s easy walking distance from most central hotels and hostels, and usually attracts a youthful student crowd. Admission is usually free before 23:00.

Having been a member of the EU for a couple of years, Slovenia’s capital is a new source of inspiration for seasoned travellers. Rich in culture and history, this new edition provides up-to-date listings on a range of accommodation, from five-star luxury to family-run guesthouses that retain their typical Slovenian charm.

Trips in and around the neighbouring European countries of Croatia, Italy and Austria also feature. The Bradt city guide to Ljubljana puts this culturally and historically rich capital on the map.

This compact guide provides listings on a range of accommodation, from new five-star luxury to family-run guesthouses that retain their typical Slovenian charm. It also covers planning a trip to or from the neighbouring European countries of Croatia, Italy and Austria.