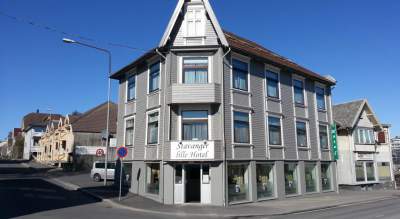 Stavanger is the gateway to the Norwegian fjords. It is considered a great place for foodies, with a range of good restaurants and an annual food fair that fills up the harbour area for a week-end each summer.

At this boutique hotel each elegant room has its own fireplace. Enjoy high-class interiors and excellent comfort in an urban environment, close to Stavanger city centre.… More

This hotel Accommodation is 200 metres from the Norwegian Telecom Museum and 8 minutes’ walk from the train station. It offers free Wi-Fi internet access and private parking.… More

This hotel is just 2 minutes’ walk from the Train Station. It offers free Wi-Fi internet access. All rooms have wooden floors, cable TV and a tea/coffee maker.… More

See in
==================
The Stavanger Oil Museum is a very interesting building with fascinating information on Norway’s oil industry. Displays of submersibles, drilling equipment, a mock oil platform, and audio-visual presentations make for a good few hours. The museum caters for all ages and is open 10:00–16:00 (Sundays and June-August 10:00–18:00).

The Canning Museum may not seem like the most interesting place to visit but it is a surprisingly good little museum with a lot of hands-on exhibits.

Gamle Stavanger (Old Stavanger) is a well preserved slice of Norwegian history. Old winding streets and wooden houses are representative of accommodation from Stavangers days as a the canning capital of Norway. Most houses in the Old are privately owned and well kept.

A good place for a photo opportunity are the Three Swords (Sverd i fjell, literally Sword in Mountain), a monument outside the centre of Stavanger, beside the Hafrsfjord. The swords themselves are massive and in the background is the fjord. The monument commemorates the battle of Hafrsfjord in the late 800’s where Harald Hårfagre beat his eastern opposition and became the first King of Norway.

Sculptures – In 2000 the mobile installation Another Place by British sculptor Anthony Gormley was placed on and off Sola beach. A few years later a new and permanent installation Broken Column[11], by the same artist, was placed at various locations surrounding the centre of Stavanger.

The Rogaland Kunstmuseum (art museum) is on Mosvatnet Lake, only 2 km from the city center. The museum has a permanent exhibition of Norwegian art, and a rotating exhibition that is sometimes quite spectacular. Be sure to see the Lars Hertervig paintings; you’ll see the landscape of the islands just north of Stavanger reflected in his work.

Stavanger Cathedral. The Cathedral (romanesque style from about 1125, with later gothic additions) is the best preserved medieval cathedral in Norway and well worth a visit.

Rogaland the jewel of Norway.

Located on the Southwestern coast of Norway the county of Rogaland is a miniature of all that makes Norway the most beautiful country in the world. This video is a musical portrait of Rogaland.

It explores the spectacular beauty and tranquility of this area while featuring a soundtrack of traditional Norwegian music by Norway’s top performers and the haunting compositions of world renowned Secret Garden, winners of the 1995 Eurovision Song Contest.

This video enters the deep fjords that cut through the steep mountains where the water is so clear the boats appear to be floating on air. It enters the countryside where the only sound is a brook bubbling through the moss covered banks and the distant bells on the grazing sheep.

It visits the thriving yet cozy town of Stavanger with all its richly painted wooden buildings. It explores the coast where rich farmland merges with the North Sea.

Filmed and produced by Jan K. Skugstad, a native of Rogaland, the deep affection he has for this area is evident in this artistic and sensitive production.