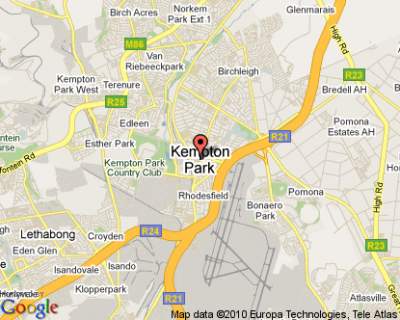 Kemton Park Johannesburg Bed and Breakfast Hotels for your Vacation in South Africa a lively city on the East Rand in the Gauteng province, Kempton Park Hotels. Kemton Park

Conveniently located less than a 5 minute drive from the international airport, our reasonably priced establishment is within easy reach of the motorways, providing swift access to the area. More

The room was very comfortble, and the included breakfast was good and plentiful. Staff was pleasant More

Our conference venue is ideally located for delegates wanting to meet close to the airport.

The Conference Centre is a double story, air conditioned thatch venue, with the Conference room downstairs and the entertainment area (for tea/coffee and lunch breaks) upstairs.

It is located in a quiet, landscaped, open area and can accommodate approximately 25 delegates.

Beautifully situated a mere 10 km north of Johannesburg international airport, this secluded lodge combines the solitude of the African bush with the luxury and convenience of modern day living. More…

It was very quiet, relaxed. Breakfast was good. Airport transportation was efficient. People were nice.… More

Situated in Kempton Park, amid beautiful gardens, fountains and statues, this modern 3-star hotel offers contemporary rooms with a flat-screen TV. Facilities include an outdoor pool, a casino, and a spa.

Woodpecker’s Inn offers bed and breakfast accommodation in Kempton Park, a 15-minute drive from O.R. Tambo International Airport and with easy access to Johannesburg and its Central Business District. More…

The comfort of the room, the cleanliness, warm welcome, and shuttle service to the airport, with breakfast to go neatly packaged. … More

In Hidden Johannesburg, Paul Duncan provides a snapshot of 28 of the city s architecturally and culturally significant buildings, alongside superb photography from Alain Proust.

Some date from the early 20th century, when Johannesburg was transforming itself from mining camp to modern metropolis.

Others speak to the influences that shaped the city: cultural, ethnic, historical, religious and commercial.

There are churches and cathedrals, synagogues and mosques, as well as schools, homes, places of business and even a prison.

Sir Herbert Baker and his partners had a hand in many notable buildings that predate WWI: the cloistered quads and crypt of St John s College Houghton; Glenshiel in Westcliff, now the headquarters of the Order of St. John; legendary Northwards in Parktown, once owned by randlord John Dale Lace and his socialite wife Josie; Bedford Court, home of mining magnate Sir George Farrar and now part of St Andrew s School for Girls; and Villa Arcadia, a Parktown mansion built to the exacting standards of Florence Phillips; St. George s Parish Church in Parktown, and St. Michael and All Angels in Boksburg.

Places that speak of another life and time, or capture the spirit of occupants long gone include Nelson Mandela House in Vilakazi Street, Orlando West, where he lived from 1946 until his arrest in 1962, now a museum that attracts visitors from all over the world. Satyagraha House, in Orchards, was home to Mahatma Ghandi.

In nearby Kew was the home and studio of sculptor Edoardo Villa and many of his works are still in situ.Anstey s was once a glamorous department store.

Completed in 1936 in the Art Deco style and, for a time, the tallest building in Johannesburg, it survives as an apartment block. Gleneagles, in Killarney, of similar style and vintage, has become another sought-after residence. There are also newer buildings whose architects have sought to integrate form and function.

The Nizamiye Masjid in Midrand stands out, and not just because of its tall minarets; St Charles Borromeo Catholic Church in Victory Park.Given Johannesburg s reputation for tearing down anything old, it is remarkable how much of the city s heritage remains; yet there is always the threat of demolition.

Hidden Johannesburg shines a spotlight on places not accessible to the ordinary person and invites us to consider the impact of the built heritage in shaping our cities. By affording us a glimpse of our past, perhaps it will help to shed light on our future.” Kemton Park.