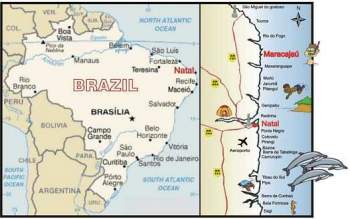 Brazil The stuff that dreams are made of

Brazil  dream destination full of both adventure and constant fun find Accommodation We are here to help you realise the dream of visiting this paradise, where the sun shines virtually twelve months of the year.

At this small rustic eco-retreat in Bahia, Brazil, Retreat Bela Natureza Brazil welcomes individuals as well as groups seeking balance and inner peace. They offer packages which focus on the loving and playful contact with their family of 13 dogs that lives at the retreat. There, you can relax and get energized, and enjoy one introductory yoga class. In the loving company of the resident dogs, you will find a nurturing atmosphere for body and soul. It is a perfect retreat for animal lovers who want to know more about the relationship between humans and dogs, and for families with children that want to learn more or work on their contact and interaction with dogs. Let the Brazilian sun warm your body and the adorable dogs warm your heart!

Joao Pessoa, the Capital of Paraiba in Brazil Besides beautiful beaches and white sand bathed by a turquoise blue sea, Joao Pessoa is a city with extremely unique characteristics for your next vacation.

Salvador is undoubtedly one of the most beautiful cities in the world. Due to its very beauty and to a series of unique features, it has become a primary destination for international tourism. Famous for its history, for the legacy left by people from other continents, for the religious syncretism and for its hospitable people, the capital of the state of Bahia. It also draws visitors from everywhere, who arrive in the city seduced by the best kind of advertisement there is: The word –of-mouth.

We are here to help you realise the dream in, visiting or retiring to this paradise, where:

We could write books here, waxing lyrical about the advantages of the Brasilian climate, lifestyle and diet, but you might think that we are biased, so try these links to see what others say (both good and bad)

Travel video about destination Brasil.
Brazil is a country of both the superlative and also amazing contrast, with dynamic metropolises, cultural centres and untouched nature.

It is the largest country on the South American Continent.

We begin our journey in Rio De Janeiro, the secret capital of Brasil, a veritable firework display of unashamed joie de vivre, football, samba and religion. The focal point of today’s Rio is the monumental glass cone of the Catedral Metropolitana that measures eighty metres high and looks like a Mexican pyramid.

The Rua Do Ouvidor, with its elegant old buildings and splendid shops, is a reminder of the city’s historical and commercial importance.

Portuguese settlers founded the city and sugar cane and gold made Rio’s colonial rulers extremely rich. In former times the coastal towns were protected by fortresses and canons.

Paraty was one of those romantic locations, south of Rio on the Costa Verde, a gem dating back to Brasil’s colonial times. Around five hundred kilometres north of Rio and deep within the Brasilian state of Minas Gerais, is a most remarkable place.

Ouro Preto was discovered at the end of the seventeenth century by Portuguese gold prospectors who discovered ‘black gold’ that changed colour due to its iron content.

São Paulo is one of the mega cities of the twenty first century and with a population of twenty million it is the economic heart of Brasil. The railway helped to transport cotton and later coffee, and its large station, with British-designed clock tower, became an important symbol.

Brasil is synonymous with sunshine, samba and exotic nature, a dream destination full of both adventure and constant fun!