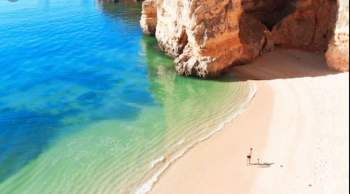 Clothes optional beach Contrary to widely held opinions about nudity in Portugal, attitudes are very relaxed. Like the UK, public nudity on a beach can be an offense if someone makes a complaint

In May Mike and Val Hopkins visited Quinta da Horta, a clothes optional holiday centre in the Algarve.

In a recent posting to the uk.rec.naturist newsgroup, the proprietor of Quinta da Horta (David & Frances Fry mailto:enquiries@naturist-holidays-portugal.com)  wrote, “Portugal’s Algarve coast is not quite the Med. or the Canaries, we don’t have the crowds, our beaches are lacking all that wonderful pollution, just a hoard of blue flags lie around and crystal clear ocean. It’s terrible, in some places you can even see the bottom when its 30 feet deep! You hardly have time for a second drink on the plane before arriving at one of Europe’s most modern and un-crowded airports. It can be quite lonely on the beach, if you’re not careful you will find yourself all on your own! We have to admit that at the moment there are not that many naturist friendly hotels, but with the number of enquiries I have been receiving for my place, I’m certain that will soon change.”

Contrary to widely held opinions about nudity in Portugal, attitudes are very relaxed. Like the UK, public nudity on a beach can be an offence if someone makes a complaint but, unlike the UK, both the perceived and actual likelihood of a complaint being made is minimal. But paradoxically whether male or female, driving bare-chested is not tolerated by the police.

Quinta da Horta is a small clothes optional resort in Ferragudo. Ferragudo is on the Eastern bank of the mouth of the river Arade opposite Portimao and is about 60Km West from Faro airport. It was recently featured in the  “Stark Naked” programme on UK TV.

Find your way to the Quinta da Horta

How to find the Quinta da Horta by road from the A22 and the N125 .. filmed at double speed so the 10 minute drive takes just 5

Val & I went there in mid May 2002. At that time the accommodation was somewhat Spartan but our understanding is that is changing year by year. Any initial reservations that we had on seeing this were quickly dispelled by a warm welcome from the owners, congenial company of the other guests,  the delights of the gardens and the pool area and, most important of all, by the culinary skills of Frances Fry. Breakfast (hearty of course, but never before 9am) is eaten communally, so is supper. The normal routine is to gather for sangria at about 7:30pm and in ample time for supper at 8:00pm. Good food, good company and plenty of table wine ensure a pleasant time for the rest of the evening.

We traveled from Bristol by Go-Fly (now Easy Jet). This was our first experience of a “no frills” airline. No frills it may be, but the service is punctilious and both the outward and return flights departed and arrived on schedule almost to the minute. On arrival at Faro we picked up a hire-car that had been booked on our behalf by the Quinta. Much of the road between Faro and Ferragudo is dual carriage-way.

In our case the opportunity to use the facilities of an art studio and (as it turned out) the excellent standard of the teaching at the ‘Life Class’ were an added attraction. Perhaps the best recommendation is to say that we have already penciled in the dates for our return visit.

Properties nearby that are available

Alvor This is the best link to use.

Anyone with mobility problems might be interested to know that (given a certain amount of respect for a hire car on rough un-metalled tracks) it is possible to take a vehicle right to the edge of some of the beaches. We visited two of them, Vale Figueiras on the West coast (Costa Dourada) and Cabanas Velhas on the South coast (Costa do Algarva).

Of the two, we preferred Vale Figueiras. Backed by high cliffs, the enormous length of sand is firm, provides easy walking and is almost entirely naturist. It is also clean because for nearly its whole length the sand is tide washed at high water. But by the same token watch the tide, unless you are prepared to get your feet wet you could get trapped, but apparently not dangerously so. With five lines of Atlantic rollers crashing onto the sand, I didn’t venture into the water beyond knee height. Take the “pretty route” from Ferragudo toward Monchique. On the right, just before Monchique, there is a big stone quarry, turn left (West) toward the coast and Aljezur. A map that shows the location of Vale Figueiras id printed on the excellent general information leaflet available (free) from Aljezur Tourist Information Office. You may also wish to pause at the nearby spotlessly clean cafe (run by a German). From Aljezur head South and look out for where the main road forks. Bear right  (signposted Bordeira) and look for a right turn onto a track signposted Monte Novo and Figueiras. This track goes all the way to down to the beach.

Cabanas Velhas  is a short distance West of Lagos (pronounced Largosh). Compared with Figueiras this beach is both smaller and more crowded. On the day we were there, the unclothed were substantially out-numbered by the clothed but this did not seem to be a problem for anyone as we inter-mingled and all scorched in the brilliant sun. However in May, even at this latitude, the Atlantic Ocean is very cold. The surf was not as heavy as that at Figueiras but as I waded out for a swim and enjoy it I found an uneven surface beneath my feet – great fun but only if you enjoy being caught off balance and knocked over by waves.

Although we did not try it, the wide expanse of Borderia looked interesting. Access appears to be by a long raised wooden walkway. Beach or not, the spectacular headland at Borderia is well worth a visit.

Those who have seen the recent UK TV programme featuring Quinta da Horta will probably remember seeing an invitingly empty beach that was the subject of the landscape painting sequence. This is close by, but detailed local knowledge is needed to find the head of the steep narrow path that runs down the face of the almost vertical cliff. Difficulty of access ensures that this beach is hardly ever used by anyone other than naturists. I didn’t try it but felt less ashamed of my reluctance to venture down that route when a younger and fitter couple reported similar misgivings. However, round the headland and little more than 10 minutes by car from Ferragudo is the “town beach” of Caneiros together with its neighbouring naturist cove . As might be expected when a naturist beach is within easy reach of a non-naturist one, a surprising number of people seem to find the need to take a slow walk along its length. But, unlike a UK beach, one does not feel that the majority of the walkers regard the naturists are some kind of free freak show.

Conversations with other visitors to the Quinta made it clear that there are very many beaches in the area that are well worth visiting. Any sparsely populated beach seems to be clothes optional by general usage and convention. Among the beaches that were mentioned was one at nearby Alvor and many others further afield on the Costa Dourada.

Did you know ‘Accommodation‘ is one of the most misspelt words in the English language? Here are some variations:
Accomadation, Accomodation, Acommodation.
Also Bed Breakfast Bed and Breakfast B&B BB or BnB details for your next vacation local information guide. B and B is an English traditional holiday idea, often hard to find in some parts of the world.