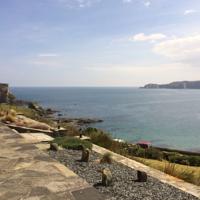 County Cork is situated in the South West of Ireland it is the largest of all the Irish counties and in many ways one of the most varied Rich farmlands and river valleys contrast with the wild sandstone hills of the west, and above all there is the magnificent coastline scooped and fretted by the Atlantic into great bays and secret coves, strewn with rocky headlands and long soft golden sands.

Heart of Kinsale is a holiday home set in Kinsale, 22 km from Cork. The unit is 26 km from Clonakilty, and guests benefit from free WiFi and private parking available on site. More

Reservation possible without a credit card

Youghal 0.6 km from centre
Beachfront
This friendly hotel has lovely views over the sea and estuary and offers good-value food. It is a good base for visits to Waterford, Cashel, Cork City and Cobh.

Walter Raleigh Hotel is between Waterford and Cork Airport, 40 minutes from Cork Harbour. Enjoy real Irish hospitality in a town beside a Blue Flag beach, where there are facilities for children and for adults.

Parkview Restaurant offers a traditional table d’hôte menu, or you can dine in the popular bar. The hotel can host Civil Registry marriages. MORE INFO

Amidst the blue Irish skies and green lands of Blarney, lies the Blarney Castle, an intriguing medieval fortification.

Set against the refreshing greens of the gardens dotted with colorful flowers and trees you will find it hard to resist the charm the fort exudes.

Built in the 15th century, this stronghold is the third of the same structure to be built on the site.

The MacCarthy dynasty, is credited with building this enchanting and spell binding castle.

One of the features that make this place really popular is the well-known Blarney Stone, also known as ‘The Stone of Eloquence’.

According to a legend, anyone who kisses this stone is rewarded with eloquence, an enticing prize for many of the worlds powerful and famous.

The Famous Blarney Castle is a medieval stronghold in Blarney, near Cork, Ireland. It is near the River Martin. The castle originally dates from before AD 1200. It was destroyed in 1446, but subsequently rebuilt by Cormac MacCarthy, the King of Munster.

It is currently a partial ruin with some accessible rooms and the battlements. There are many legends as to the origin of the stone, but some say that it was the Lia Fáil—a magical stone upon which Irish kings were crowned.

The Blarney Stone is a block of bluestone built into the battlements of Blarney Castle, Blarney about 8 km from Cork, Ireland.

According to legend, kissing the stone endows the kisser with the gift of gab (great eloquence or skill at flattery). The stone was set into a tower of the castle in 1446. The castle is a popular tourist site in Ireland, attracting visitors from all over the world to kiss the Stone and tour the castle and its gardens.

The word blarney has come to mean clever, flattering, or coaxing talk.The stone is believed by some to be half of the original Stone of Scone, and said to have been presented to Cormac McCarthy by Robert the Bruce in 1314 in recognition of his support in the Battle of Bannockburn.

The proprietors of Blarney Castle list several alternative explanations for the origins of the Stone and its supposed powers, all of which suppose that the Stone had previously been in Ireland but was then taken to Scotland and returned to Ireland in 1314. The stories they list include:

The Stone was the stone that Jacob used as a pillow, and was brought to Ireland by the prophet Jeremiah

The Stone was the pillow used by St. Columba of Iona on his deathbed The Stone was the Stone of Ezel, which David hid behind on Jonathan’s advice, while fleeing from King Saul, and may have been brought back to Ireland during the Crusades.

The Stone was the rock that Moses struck with his staff to produce water for the Israelites, during their flight from Egypt in Ireland, the Stone was known as the Lia Fáil or “Stone of Destiny”, part of the king’s throne, with mysterious powers The stone’s powers were revealed to the McCarthys by a witch who had been saved from drowning.

Surrounding the castle are beautiful and quite extensive gardens. There are paths touring the grounds with signs pointing out the various attractions such as several natural rock formations which have been given fanciful names, such as Druid’s Circle, Witch’s Cave and the Wishing Steps. Blarney House, a Scottish baronial-style mansion, was built on the grounds in 1874. It is also open to the public.

Irish Rentals Vacations Accommodation.
Property Rentals in County Donegel Ireland  presents an ever changing spectacle of landscapes and seascapes set against a backdrop of mountains and moors.

Property Rentals in Ireland Galway, the largest county in Connaught, celebrated in song and story throughout the world takes centre stage on Ireland’s western seaboard. A spectacularly beautiful county, a medley of contrasts  the wildest and remotest of countryside teamed with one of Europe’s most vibrant and popular cities Irish Rentals Vacations Accommodation

A holiday in Wexford can match anything more exotic locations have to offer. Boasting over 115kms of coastline and golden sands have long been popular with families wishing to escape the noise, stresses and strains of city living.