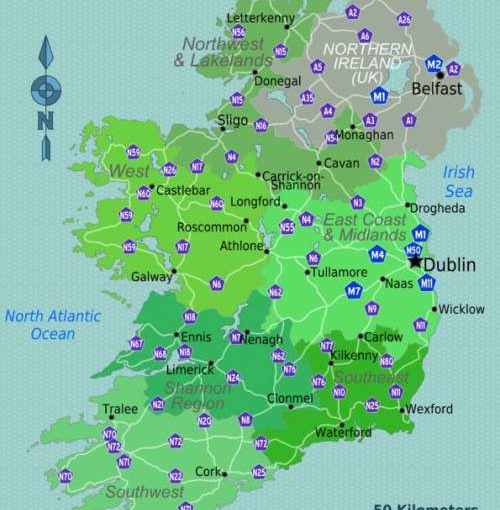 The south west of the country is particularly popular with nude sunbathers who enjoy the benign climate courtesy of the Gulf Stream.
Fans say that Ireland’s climate is actually perfect for nude-beach-going.

These are the top five destinations in Ireland as reported by nude-beach lovers! About four miles from Galway, just across the Barna Woods and a Texaco petrol station, there is a turn left signposted Silver Strand.

About 300 yards west of the main beach there is a small beach which is often used by naturists.

To get to the naturist area, walk for 15 or 20 minutes along the stone or rough path behind the wall nearby.

Peace and quiet and, above all, privacy is sure on a spectacularly beautiful setting close to the buzzing and lovely City of Galway .

The beach is great place Connemara in County Galway where nature is at its most beautiful with stunning scenery consisting of rivers, mountain lakes and beaches. To get there you need to make Galway – Clifden road from Galway City also called the N59. Close to the coast road (R341) in Roundstone.

Walk the length of the beach and take the short path up a small hill at the end of the bay. You come to a gate.

Go through the gate and walk across the headland for about 400 yards.

There you will arrive at the beach with a pleasant sandy cove.

Please note that the Cove will not see until you’re almost in it which makes it an ideal setting for naturists in the first place.

If ever a place that lends itself to being a paradise in Ireland for naturists then it is the stunning West Cork in the south west of Ireland.

There are dozens of quiet coves and far east and west sides of Clonakilty Bay, for example, which is very suitable for naturism.

On the eastern side there is a suitable cove near the village of Ring.

Turn right at the bridge in the village and follow the road along the coast in Inchydoney Island across the channel on the right.

After a while the road turns inland and uphill.

Half way up the hill is a narrow passage to your right that leads almost to a sheltered rocky cove that is an accepted and private facilities for naturists.

Further along this country road is a sign for Simons Cove which is along the headland to the South Ring where a small passage that leads to the sea.

The Cove is a protected reef but may have thick fibrous seaweed.

The shores of the magnificently named roaring Water Bay and Lough Hyne, Skibereen past, including the Beara peninsula have received many deserted beaches naturist area.

Corballis is a widespread beach near the pretty village of Donabate in north County Dublin to exit 5 on Wed motorway going north.

The road from this leads to Donabate village signposts for the beach.

Drive onto the beach and park as far down as possible.

Walk further down the beach for 15-20 minutes.

This area is known as Corballis and it was long used by naturists.

Alternatively: Two miles down the road to Donabate turn right at the signpost for the Island Golf Club and Golf Club Corballis.

Continue for about 1miles until you see a small green gate just before the entrance to the Island Golf Club.

Walk through the gate and follow the path to the dunes until you reach the shore.

Turn right and walk for 10-15 minutes. Peace and quiet and there sure is a long and respected tradition for naturists in this area.

Brittas Bay is probably one of the best naturist beaches on the east coast of Ireland.

It is also a very popular camping and caravanning resort most frequented by Dubliners escaping the capital over the weekend and holiday period.

The main beach is just a fabric place.

It is long and sandy, backed by large dunes but with a stony strip between the dunes and the water (sandals are recommended!).

Go down this road until you can go no further.

Turn right and follow the coast for about 1 mile until you come to a collection of trees and fir gateposts Buckrooney marked a road junction.

At the junction there is a small green gate.

Walk through the gate and follow the path to the naturist part of the beach.

When you are on the beach turn left and walk until you see fencing up to the dunes past the sixth in a line of lifebuoys.

Between fencing and the stream further along the beach is the naturist area.

You can swim, sunbathe and walk around in comfort on the beach or dunes possible without fuss or interruption.

However, as this is a very popular family resort, do not venture outside naked dedicated naturist area.

So that said Ireland is a prissy country? Freedom of expression is evolving all the time in the Emerald Isle and fascinating country De Valera’s maidens dancing at crossroads are long gone with the fairies!

For more information on other locations nudist and practices in Ireland, see The Irish Naturist Associationhttps://takeabreakholidays.com/asia/thailand/clothes-optional-beaches/

Did you know ‘Accommodation‘ is one of the most misspelt words in the English language? Here are some variations:
Accomadation, Accomodation, Acommodation.
Also Bed Breakfast Bed and Breakfast B&B BB or BnB details for your next vacation local information guide. B and B is an English traditional holiday idea, often hard to find in some parts of the world. Plus when on vacation info on local cuisine and street markets to visit on your holiday.