Normandy Enjoy Normandy’s warm hospitality, its unique blend of maritime traditions and rural way of life. Marvel at its historic towns and monuments, stroll down quiet country lanes and enjoy local dishes in picturesque villages, or sip a drink by the quayside of one of its old ports while fishermen repair their nets and seagulls soar overhead. 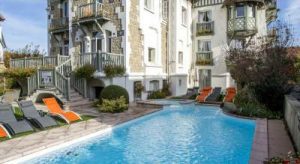 L’Augeval – Hôtel de Charme is divided in 2 manor houses in the heart of Deauville, between the famous Planches Promenade and Hippodrome Deauville-La Touques. There are 4 people looking at this hotel. More 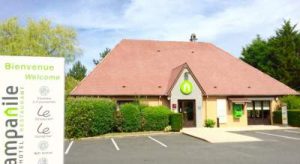 Set on the banks of the River Touques, this hotel offers modern rooms with free Wi-Fi access just 3 km from the beach of Deauville. Guests are invited to enjoy a drink on the hotel’s garden terrace. There is 1 person looking at this hotel. More 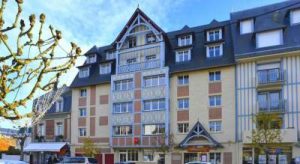 This design hotel is set in the heart of Deauville, just 550 metres from Deauville Train Station and the beach. There is 1 person looking at this hotel. More 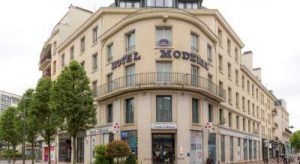 Situated in Caen’s city centre, the Best Western Hotel Moderne Caen is just 1.5 km from the train station and 6 km from Campiquet Airport. There is 1 person looking at this hotel. More

An easy day-trip by train north of Paris will bring you to the cathedral towns of Amiens and Rouen, the gem of Normandy.

Amiens has an attractive pedestrian zone running through the modern downtown, and an interesting, if small, Old Town, but it is the cathedral we have come to see the largest gothic cathedral in France, the land that invented this enduring form.

Not only large, but perfect in form with all the standard gothic design you could hope for.

From here we continue by train to nearby Rouen, which has the largest collection of half-timbered medieval buildings in France. Easy to explore on foot, start out from the train station and keep on going through one historic lane after another.

Here too you will find a famous cathedral but in this case the town itself is the main attraction, its narrow streets lined with thriving shops and historic monument, including the place where Joan of Arc was burned at the stake.

Photographed during the Christmas season when tykes are skating in the main square and colorful lights line the shop fronts, this is a special time and place to enjoy.

Normandy is a geographical region corresponding to the former Duchy of Normandy. It is situated along the English Channel coast of Northern France between Brittany (to the west) and Picardy (to the east) and comprises territory in northern France and the Channel Islands.

The continental territory covers 30,627 km² and forms the preponderant part of Normandy and roughly 5% of the territory of France. It is divided for administrative purposes into two régions: Basse-Normandie and Haute-Normandie. The Channel Islands (referred to as Îles Anglo-Normandes in French) covers 194 km² and comprise two bailiwicks: Guernsey and Jersey, which are British Crown dependencies.

The former province of Normandy comprised present-day Upper and Lower Normandy, as well as small areas now part of the départements of Eure-et-Loir, Mayenne, and Sarthe.

The name of Normandy is derived from the settlement of the territory by Vikings (“Northmen”) from the 9th century, and confirmed by treaty in the 10th century. For a century and a half following the Norman Conquest of England in 1066, Normandy and England were linked by Norman and Frank rulers.

During the Battle of Normandy in World War II, Normandy became the landing site for the invasion and liberation of Europe from Nazi Germany. This is recognised as the start for the war in Western Europe.

Basse-Normandie is predominantly agricultural in character, with cattle breeding the most important sector (although in decline from the peak levels of the 1970s and 1980s).

The bocage is a patchwork of small fields with high hedges, typical of western areas. Haute-Normandie contains a higher concentration of industry. Normandy is a significant cider-producing region, and also produces calvados, a distilled cider or apple brandy.

Treasures of France: A Grand River Journey from Normandy to Provence.

And visit Paris during your Seine River cruise, too, of course! Your France river cruise begins by tracing the Seine from Paris to the coast and back aboard the Deluxe ms River Venture.

On the Normandy coast, follow the heroic journey of Allied soldiers who stormed the beaches on D-Day. Then, your Seine River cruise leads back to Paris, the “City of Light,” where your France river cruise continues to the Mediterranean aboard the Deluxe ms River Discovery II.

As you cruise, indulge your palate with wine and chocolate tastings, and many more samplings of regional specialties. Throughout this one-of-a-kind European river cruise, you’ll experience the richly satisfying culture, cuisine, and joie de vivre that make France such an inspiring destination.

Many children and family members of war veterans visit the Normandy coast to honor their ancestors’ service to our country. If you’re not sure of when and where your family members may have served, you can visit these helpful links: Ancestry.com, Normandy American Cemetery, Normandy Memorial, Omaha Beach Memorial.

Treasures of France features our Seine River Cruise, sailing roundtrip from Paris, combined with our French Waterways cruise on the Saône and Rhône rivers. Join us for this extended European river cruise featuring all the richly satisfying culture, cuisine, and joie de vivre of France at an unbeatable value!