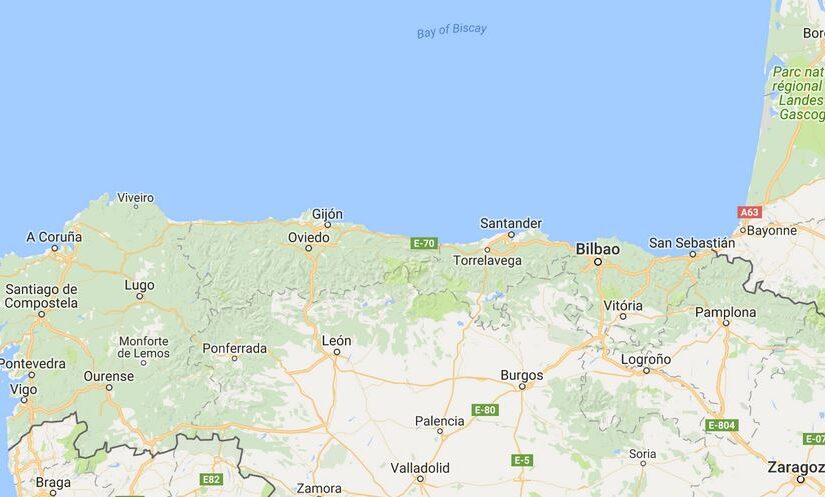 Naturist Beaches Costa Verde Girona Spain is one of the most favoured holiday destinations in the world. It receives an average of fifty million visitors annually. With such a high number of guests it is plausible to say that many tens of thousands of these visitors are just plane Nature beach lovers

Spain is one of the most favored vacation destinations in the world.

It receives an average of fifty million visitors annually.

With such a high number of guests it is plausible to say that many tens of thousands of these visitors are Naturists.

Due to a lack of information in the past, many in our lifestyle have found Spanish Naturist locations only by shear luck, word of mouth, or occasionally by reading reports written by foreign visitors.

Girona on the Costa Verde

Spain’s only Naturist magazine Todo Naturismo and the Virtual Naturist web site are slowly trying to change this with actual and precise Naturist information for Spain. Naturist Beaches Girona This article will help prepare you for a first visit or a revisit.

The first area we will concentrate on will be the Catalonian region whose capital is the world famous city of Barcelona.

We will also quickly go over all the Naturist centers in Spain, and take a short trip to the Balearic islands.

The Green Coast is covered in depth in a separate article.

Barcelona is Spain’s second largest city after its national capital, Madrid. Barcelona is a beautiful Mediterranean city of 3,100,000 inhabitants, rich in culture and artistic monuments.

It is both cosmopolitan and enchanting at the same time.

If you are visiting Barcelona, then you should also visit these places as well; Barrio Gótico, La Rambla, El Puerto, Ensanche and Museo Picasso.

More information can be received from the Tourist office at: Patronato Municipal de Turismo, P.° de Gracia, 35, Barcelona. telephone: + 34 (93) 215 4477 or from the many other information centers dotted around the city.

Girona on the Costa Verde

While Cap D’Agde (France) will be fine for some people (it is easy to get to from Catalonia), it is not everybody’s choice for a Naturist vacation.

You might prefer the more relaxed and intimate environment of small beaches and communities, which are difficult to find at France’s Mediterranean beaches & resorts.

From the confines of the Iberian northeastern tip where the Pyrenees abruptly end and meet the Mediterranean sea the Coast of Girona, is best known as La Costa Verde.

As the Costa Verde boasts of as many as 40+ beaches and coves where Naturism can be enjoyed, far too many to mention here!

I will cover the Girona province only.

For the adventurous, La Costa Verde hides many surprises just waiting to be discovered by those ready to seek them out.

For textiles this comes in the form of confronting 18 or so textile free beaches for the first time.

For the Naturist, seeking these relaxing clothes free beaches usually takes the highest priority over other holiday activities

The peninsula that culminates at Cap de Creus hides several more small beaches where visitors can expose their skin to the warm sun, surround themselves with nature, and bathe peacefully in the Mediterranean waters.

Heading south, in the middle of Roses Bay near the town of Sant Pere Pescador, we find an immense stretch of sand broken up by frequent rivers and streams.

Over 12 kms, it has been given different names such as; Empuriabrava, Can Comes, Sant Pere Pescador, Empuries.

Naturism is practiced in many places along this stretch. Many campsites and tourist complexes dot this stretch of shoreline and there is usually a Naturist zone nearby.

Further south and past the town of L’Estartit we find yet another wide expanse of sand, Playa de Pals is well recognizable by its giant red and white painted Radio Antenna masts of Radio Liberty.

Playa Pals is Clothes free only in some zones, and has the advantage of providing services not found at quieter and secluded beaches.

300 meters from the southern end there is a smaller more intimate bay.

This quaint cove is more popular for Clothes free than its bigger neighbour, because of calmer winds and seas.

Not very far south there is another marvelous opportunity to shed garments and enjoy the golden Mediterranean sun.

This time Naturist Beaches Girona we can stay at a Naturist resort quite close to 2 small coves.

Camping Relax-Nat is a family campsite just north of the town of Palamos.

Many of its residents use the small coves of Cala Bona and Cala Streta when the campsite becomes too claustrophobic.

The coves are neighbors separated by a small outcrop of rock.

Well away from the hassle of the usual textile tourist haunts, they are in an area of complete tranquillity, yet are a mere 3 km from the main coastal road.

Juli Garreta, 23, Girona •
The Hotel Europa is a small, cosy hotel boasting a superb location just 800 m from Gironas picturesque old quarter, and only 40 m from the railway and bus station.… More

The Hotel Europa is a small, cosy hotel boasting a superb location just 800 metres from Girona’s picturesque old quarter, and only 40 metres from the railway and bus station.

Make your stay a comfortable one at the Europa, whose tasteful rooms have a private bathroom, flat-screen TV and both air conditioning and heating.
The hotel has a library, and Wi-Fi is free on the ground floor. Reception is open 24 hours a day, allowing you greater flexibility during your stay.
Explore Gironas famous monuments on foot, including the iconic Plaça Catalunya, just a 2-minute walk away, as well as the Jewish quarter and the university, also found nearby.
This property is decorated with iconic images from the city’s past, which blend well with the modern style and facilities on offer. These facilities include the BLANC restaurant, which offers light lunches and Mediterranean favourites with an Eastern touch from an á la carte menu in the evening. You can also start off a busy day’s sightseeing with the hotel’s extensive hot and cold buffet.
Hotel Rooms: 44

Along the Tossa de Mar road we find more excuses to throw our clothes aside.

Not many textiles will bump into these secret spots.

Cala Vallpresona is both difficult to find and to access.

Quite an effort for the hardy, yet the rewards can be blissfully appreciated and fulfilling.

Cala Sa Futadera on the other hand, can only be reached by boat and is by default nearly always empty.

To reach the first most northern of the three beaches Cala Senyor Ramon, turn at km 35 off the GI-682 (Tossa De Mar) road, signposted for restaurant and go down some steep steps.

A huge mount abruptly rises from the sea. Before access was improved this beach was a favorite for early pioneers of Spanish Naturism.

As beaches go it wins no prizes, but for sheer Naked freedom, free of charge, it deserves a worthy mention.

A narrow broken path takes about ten minutes to descend to the beach.

Near its base tents spot the pine forest haphazardly anywhere there is room.

The beach is rocky but with a few sandy spots to lie on.

You may also wish to be clothes free on the path, since only Naturists use it, especially when climbing back up.

And beach shoes are recommended.

Peaceful and friendly, you should seriously consider this place for a few days rest.

3 kms South of Tossa De Mar we pass Cala Llevador, which lies hidden, completely enveloped by a blanket of dense green Mediterranean jungle that covers the mountains that have fallen to the sea.

Before we reach the southern borders of Girona, we have a chance to sample the Costa Verde in a Naturist fashion.

La Boadella beach is mistakenly named as Santa Cristina in many guides.

Santa Cristina is its neighbor and is definitely not Naturist.

A brisk 400 meter walk from the hotel of Santa Cristina, it unfortunately also attracts many textiles!

Naturists have to suffer the humiliation of being pushed to its edges, when the number of textiles is insufferably high.

One beach we think worthy of mentioning is the beach of El Torn at: L’Hospitalet de L’Infant, Vandellós, Tarragona, Catalunya, Spain.

Entrance to the official car park is found just past the railway crossing.

The second entrance to the beach is found just before the railway crossing.

Drive for 1 km & park anywhere you can.

Cross the railway line and take one of the many paths down to beach’s midpoint.

Park before the tunnel, walk a further 50 m to the beaches southern end by Islet.

Naturists gather mainly at the north end of the beach by the bar.

Smaller groups gather by Islet at its southern end.

Due to its size it can seem sparsely populated even in high season, but because of the new Naturist campsite El Templo Del Sol attendance may be higher now.

The beach is regularly cleaned by the authorities.

Please use the garbage cans!

The beach has lifeguards & first-aid.

There is parking available for a small charge and the beach is patrolled by police.

Other services such as refreshments and deck chairs are available from a bar on the beach.

Retracing our steps back to Barcelona, we may if we choose board a ferry that will take us to the Balearic islands.

Mallorca and the island of Menorca can both be reached from Barcelona by sea or air.

Ibiza can be reached either from Mallorca or from the cities of Valencia and Alicante or Denia found just north of Benidorm.

The island of Formentera can be reached from Ibiza or Denia on the mainland.

Most of the islands posses their own characteristics.

Mallorca is a general tourist destination which offers a bit of everything from nightlife to wildlife.

A notable scenic area is the Cap De Formentor region enjoyed by Naturists and textiles alike.

Mallorca has some of the world’s best natural caves, such as Drach caves located on the eastern side of the island.

Ibiza by contrast is the youths’ vacation paradise where everything goes.

Its neighbouring isle, Formentera is more laid back and offers many golden opportunities for Naturists on its unspoiled shores.

This can be also said of Menorca.

Over 30 beaches where Naturism is allowed can be found distributed throughout the four islands.

This is more common at Ibiza and Formentera where Clothes free is much more readily accepted.

Well that’s it for the Mediterranean Naturist beaches of Spain.

If you are interested in reading more about the Spanish beach scene, take a look at the other article in this issue, The Green Coast. Naturist Beaches Gironahttps://takeabreakholidays.com/clothes-free-beaches-of-spain/costa-verde-beaches/