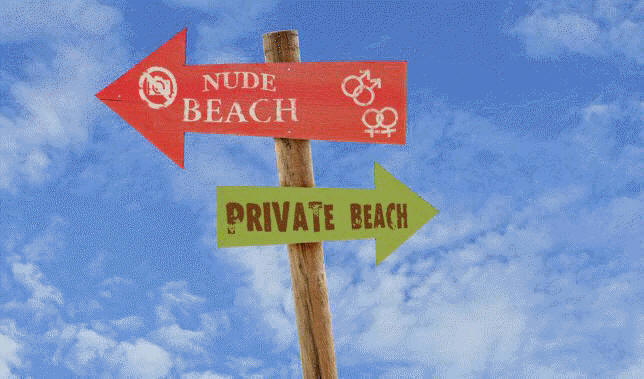 The Cadiz area has around 250km of coast and the beaches are simply superb; the coast is covered in bright white sand. Worth keeping in mind are the number of naturist beaches dotted around, for example the south of the beach in El Palmar. If you’re interested or think you might be offended if you stroll too far it would probably be worth finding out where they are.

In the summer months the southerly wind from Africa can make the temperature stifling, some months hitting an average high of 33 degrees C. Assuming you’re lucky with the wind however, the temperature is hot, but not disagreeably so, it’s advisable to go outside the peak of summer for the cadiz naturist beaches.

The main nudist recreation areas are logically the coves which are apart from the urban nucleus, and in particular the Cala del Aceite (The Oil Cove) and the small coves of the East, to the north of the town, past the Roche cape.

These places are intimate and quiet spots although we would not deny that in summer they lose a bit of their charm. They are solitary beaches on which nudists and the fully-clothed live together without too many problems and where the presence of stone blocks and twists and turns ensure a certain pleasant intimacy.

If these coves are very full or the tides have left them reduced to a bare minimum, there is another fantastic area to practice nudism and that is the Castilnovo Beach, on the far south of the town, next to El Palmar de vejer. This beach, together with that of Los Bateles, are a haven of peace and seclusion. The absence of nearby construction and the difficulty of access mean that a peace and tranquility may be enjoyed that is unusual for other areas of the andalucian coast, even in the month of August.

With regard to the surroundings, you can continue south until the Caños de Meca area, another well-known spot for nudism in Cadiz. Both the Faro de Trafalgar beach and the Cortinas beach and their nearby cliffs, constitute classic areas for lovers of nudity and the enjoyment of liberal, free atmospheres

Cadiz itself is one of the oldest towns in Western Europe, thought to have been a settlement for some 3000 years, and as such has some interesting sights. For a start, the skyline in the old part of the city is much the same as it was in medieval times due to being built on a sand spit. The cost of building foundations for larger buildings would be very high. Things you will probably want to see in Cadiz include the Cathedral, the view from the top of the Torre Tower, which still commands a 360 degree view of the city, and the Sunset from the beach.

The city is also quite a good place to go for the nightlife, with many bars dotted around the city and coast as well as being a university town and offering a number of
carnival events which tend to run throughout the year.

Granada
Benalnatura – Benalmádena
Access through the road N340, km 218, at less than a kilometre from the casino of Torrequebrada Torre del Mar. Family crowds. Nudity is compulsory as sign says.