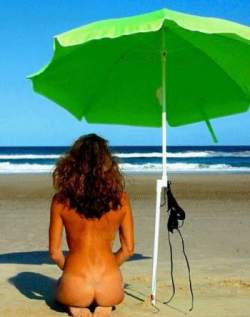 There are traditionally many beaches in Spain that are Clothes Optional

Fuerteventura is on the same latitude as Florida and Cairo. It lies 60 miles off the African coast and has a barren, desert type landscape. Cloudy days are common in winter, but rainfall is extremely low and will be short, sharp showers rather than prolonged periods. The island is situated in the northeast trade winds and there is a fairly strong NE wind blowing for much of the time. This is stronger in summer than in winter.

A word to the wise about Spanish Beaches and Nudity.

All the public beaches in Spain are free to use, and by law are also clothing optional. (The right to be naked in any public place in Spain is a part of the human rights of every person in Spain. This includes: publicly owned beaches, rivers, forests, lakes, even streets and town squares!)

Most nudists/naturists will be found at one end of the public beaches, or to avoid distressing delicate non-nudists will choose one of the many secluded coves for sun-bathing. So, do not be suprised if you see full nuidty on any beach, as the braver nudists will not hesitate to sunbathe where-ever they wish.

There are many beaches which have become accepted as “nudist”, and it is normal for naturists to use these beaches rather than upsetting the prudish textiles.

If someone complains to the police about your nuidty, you will be safe from prosecution unless you are comitting an indecent act, the police themselves are liable to civil action should they stop a person nude sunbathing.

Nudism is the social culture of life, without clothes, and so in other public and private places. Generally synonymous with clothing and departure after the NFN (Dutch Naturist Federation), is the way of life in harmony with nature and the state of nature. Characterized by common nudity, naturism is to promote self-respect, respect for others and respect for nature and the environment.

Naturism began in the 20th Century in Germany and France as a reaction to Victorian morality and industrialization. Heinrich Pudor storm and Richard Magnus Weidemann founded Nudism (FKK) “free body culture” in Germany. It ‘was promoted by Kienné de Mongeot, and brothers Jacques Demarquette Durville. Later, the movement in the Netherlands, Belgium, was popular and more recently Spain, and several other European countries.