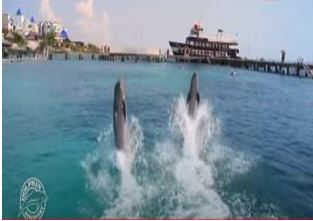 Cancun Mexico has a reputation as a party city with some of the biggest discos anywhere packed by thousands of vacationers year round.

But Cancun is a lot more than just a party city. Beautiful beaches, golf courses and diverse activities like deep sea fishing and swimming with whale sharks.

Mayan sites like Tulum and Chichen Itza are available as is Isla Majures and Contoy Island. (we have been to all see videos)
From the unbelievable blue sea surrounding it to the lush mangroves and 5 star resorts, Cancun is whatever you want it to be.

With a population of more than 20 million people, Mexico City is one of the largest cities in the world.

Only in recent years, travellers have been making their way to the Mexican capital to find themselves pleasantly surprised with everything this metropolis has to offer.

Your taste buds will be delighted as you immerse yourself into this in-depth culinary adventure, with an emphasis on street food, from tacos and tostadas to the best restaurant in North America, all meant to give you a full picture of what eating in Mexico City is like.

Let Isabel Torrealba, a Mexico City native, journalist, and cultural anthropologist, guide you from street to street and taco to taco.

Swim with dolphins in Cancun

Adventure and Watersports in Cancun

Children as young as 3 can enjoy this fun experience.

Cancun is a relatively new coastal resort in Mexico and was created in an attempt to replicate the success and popularity of Acapulco and its major tourism boom. Part of the Yucatan Peninsula, Cancun quickly evolved into a truly world-class resort, with many outstanding stretches of white sandy beaches and Caribbean coastline.

A Deserted Island Four decades ago, Cancun was a deserted island and few even knew of its existence.

Located in a nearly forgotten region of the Caribbean, it consisted of a series of sand dunes in the shape of a number “7 – some parts of which were only 20 meters (66ft) wide-separated from the mainland by two narrow canals that opened out on to a huge lagoon system. The coast was comprised of marshes, mangroves, virgin jungle and unexplored beaches. Even its name was not clear; some maps called it “Kankun” (a single word written with the two “K’s”), which means “pot of snakes” or “nest of snakes” in Maya.

Your next Cancun Vacation.

This mix of modern and traditional, the clichéd and the surreal, is the key to Mexico’s charm, whether your passion is throwing back margaritas, listening to howler monkeys, surfing the Mexican Pipeline, scrambling over Mayan ruins or expanding your Day of the Dead collection of posable skeletons.

Mexico is enjoyable year-round, but October to May is generally the most pleasant time to visit. The May-September period can be hot and humid, particularly in the south, and inland temperatures can approach freezing during December-February. Facilities are often heavily booked during Semana Santa (the week before Easter) and Christmas.New Year, the peak domestic travel periods.

Mexico’s climate has something for everyone: it’s hot and humid along the coastal plains, and drier and more temperate at higher elevations inland (Guadalajara or Mexico City, for example). Try to avoid Mexico’s southern coast between July and September – the resorts are decidedly soggy and jam-packed, as July-August is also the peak holiday months for foreign visitors.

Factoid
Pyramid Envy
While Egypt might be the first place that comes to mind when thinking about pyramids, Mexico is actually home to the world’s largest pyramid.

Weather Overview
Mexico’s climate varies according to its topography. It’s hot and humid along the coastal plains on both sides of the country, but inland, at higher elevations such as Guadalajara or Mexico City, the climate is much drier and more temperate.

The hot, wet season is May to October, with the hottest and wettest months falling between June and September over most of the country.