Villas that are available in Australia

There is 1 person looking at this hotel.

Adelaide Central YHA offers modern air-conditioned accommodation in the heart of the city centre. Guests have a choice of dormitory and private rooms, and some have a private bathroom.

The bars, clubs, restaurants and cafes of the city centre are on the doorstep of YHA Adelaide Central. The hostel offers a tour desk and onsite travel agency.

Each room includes ceiling fans, heating and a work desk. Private rooms with en suite bathroom are available. Some rooms also have a balcony with outdoor seating.

Facilities at Adelaide Central YHA include a 24-hour internet kiosk, luggage storage, shared dining room and a self-catering kitchen with free tea and coffee. The lounge area offers comfortable sofas, plus a flat-screen TV with DVD player and cable channels.

Located just 20 minutes’ by bus from the Airport or  Railway Station, YHA is just 2 minutes’ walk from  Central Bus Station. 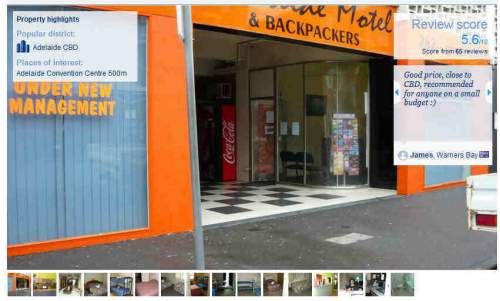 Featuring a shared kitchen and guest lounge room, Adelaide Motel & Backpackers offers a choice of private or dormitory rooms in the heart of the city centre. The free city bus service stops outside.

Adelaide Motel and Backpackers is a 10-minute walk from Railway Station. It is a 15-minute walk to the Rundle Mall shopping area and Chinatown and only 5 minutes’ drive to the Oval.

Free Wi-Fi is available in the lobby area. Guests can cook in the shared kitchen or try the many restaurants, cafes, bars and nightclubs that are on the doorstep.

Adelaide, Australia, is one of the nation’s most striking cities. Situated over the River Torrens and overlooking the Gulf of St. Vincent, this is the perfect combination of big-city living and outdoor beauty.

Australia Back-Packing. Adelaide Back Packing
Adelaide is a new city in an old land. Founded as a British colony in 1836, it is now the capital of South Australia.
Today its rich mix of diverse cultures lives together in a relaxed and cosmopolitan lifestyle in this river city. Not only is it full of green parks but has 30km of beaches stretching along its suburbs.
The city is famous for its alfresco eating culture and is the centre of the Australian wine industry, with some of the best food and drink in the world.
When Governor John Hindmarsh arrived to found a British colony in 1836, the Adelaide Plains had been home to the Kaurna Aboriginal people for many thousands of years.
The city that arose on the plains has developed into one of the most culturally diverse in the world.
The centre, which lies near the Torrens River rather than the coast, is a grid of wide graceful streets encircled by a ring of parks.
This gives Adelaide an open, green aspect, which coupled with the blue skies of the warm South Australian climate make for a beautiful city.
The colonists came ashore at Port Adelaide, whose 19th century centre is still intact and gives the visitor a feel of the early days of the colony.
It soon spread out to the seashore, and now has a long line of relaxing beach suburbs easilyaccessible by vintage trams that run from the city centre.
The arrival of successive waves of immigrants – from Germans and Italians to Lebanese and Japanese – have given the city an enviable reputation for good food and drink, with some of the most diverse eating opportunities of any city in the world.
The wine-making brought by German immigrants has turned Adelaide into one of the world’s great wine producing centres.
Things to do.
Botanic Gardens
Opened in 1857, the Botanic Gardens, modelled on English gardens, feature plenty of native trees and plants.
The Bicentennial Conservatory that towers over the gardens houses a tropical rainforest environment and is the largest glasshouse in Australia.

In the heart of the austere, monumental Victorian grandeur of the official buildings, this art gallery has a wide collection of Aboriginal art both traditional and contemporary, as well as colonial, modern Australian and British art.
South Australian Museum
The main focus of the museum is the astonishingly ancient history of the land of Australia, with the Origin Energy Fossil Gallery displaying some of the oldest fossils in the world. You will also find extensive exhibitions of Aboriginal history.
Migration Museum
To get a true picture of the stories of the diverse ethnic groups that now make up the South Australian people, head for this museum full of fascinating personal stories of arrival in the new colony, plus the story of the Aboriginal people.
Tandanya – the National Aboriginal Cultural Institute – established in 1989, was the first indigenously owned and managed arts centre in Australia. The institute has exhibitions of Aboriginal and Torres Strait Islanders art from across Australia.
National Wine Centre of Australia
The nearby Barossa Valley is Australia’s wine producing heartland, and this centre in central Adelaide, with its own vineyard, offers interactive exhibitions explaining the whole winemaking process, plus wines to taste and buy. Adelaide Back Packing.
Did you know… ‘Accommodation‘ is one of the most misspelt words in the English language? Here are some variations:
Accomadation, Accomodation, Acommodation.
Also Bed Breakfast Bed and Breakfast  B&B BB or BnB details for your next vacation local Regional Cuisines information guide. B and B is an English traditional holiday idea, often hard to find in some parts of the world.