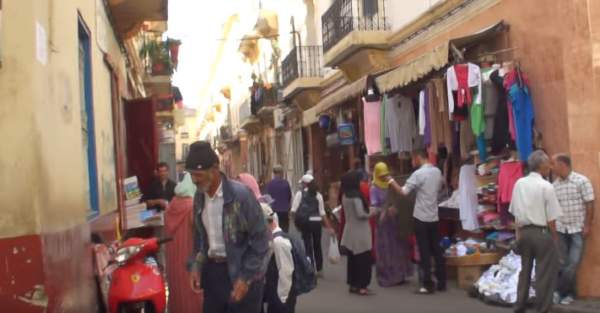 Tangiers Holidays in Morocco at Tangier a selection of local hotels. The city is very popular with tourists and Moroccans alike many tourists come over on day trips from Spain.

Most visitors to Tangier take a tour, daytripping in from Spain for a predictable series of experiences. But wandering through this delightfully disorienting town, at your own pace, is more fun. And to enjoy it with maximum understanding, you can hire a local guide.

Tangier is a major city in northwestern Morocco. It is located on the Maghreb coast at the western entrance to the Strait of Gibraltar, where the Mediterranean Sea meets the Atlantic Ocean off Cape Spartel.

It is the capital of the Tanger-Tetouan-Al Hoceima region, as well as the Tangier-Assilah prefecture of Morocco.

The history of Tangier is very rich, due to the historical presence of many civilisations and cultures starting from before the 5th century BC. Between the period of being a strategic Berber town and then a Phoenician trading centre to the independence era around the 1950s

Tangier was a nexus for many cultures. In 1923, it was considered as having international status by foreign colonial powers, and became a destination for many European and American diplomats, spies, writers and businessmen.

Local accommodation is listed below. 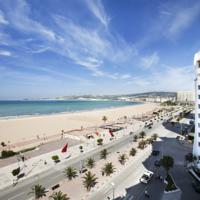 This 4-star hotel, in the heart of Tangier, overlooks the Strait of Gibraltar and the Bay of Tangier. It features an outdoor pool, and offers air-conditioned guest rooms.

At Kenzi Solazur, the restaurant serves traditional Moroccan cuisine. There is also a gourmet restaurant and a Sea Bar cafeteria. Guests can enjoy a drink in the piano bar.

With a nightclub on site, additional facilities include a concierge service and a tour desk.

The 3-star hotel El Minzah is situated in the heart of Tangier near the old medina. It offers 2 swimming pools, a fitness centre and panoramic views over the bay.

Offering panoramic views of the Mediterranean bay, Hotel Continental is 5 minutes from the port, in the heart of the Médina.

This 19th-century building is classed as a National Heritage site and has Moroccan-style lounges with traditional mosaic tiles.

Views of the sea or the Medina feature in all of the rooms at Hotel Continental. Each overlooks the patio and is individually decorated, and some have a private balcony. Free Wi-Fi is available in public areas.

Guests can enjoy the views through the restaurants arches while sampling the buffet breakfast or Moroccan meals. Additional facilities at Continental include a hammam and a currency exchange service.

For decades, between 1920 and the late 1950s, Tangier was a playground for adventure-seekers and the rich and famous, attracting all those seeking a tax haven or a mystic destination, from authors to artists and spies to aristocrats.

When Spain relinquished Tangier back to Morocco in 1960, its duty-free status went with it, and the city lost a great deal of its flair. Tourism is slowly increasing once more, though: visitors succumbing to the city’s proximity to Europe are discovering that its decayed grandeur still has much to offer; from its palm-treed promenade and sandy beach to the old town section, and its outlying villages and resorts.

Despite its fall from glory, a stylish cafe society has once again begun to build up in modern day Tangier’s boulevards, and the merchants in the medina (old quarter) are doing good trade with tourists exploring its maze of narrow streets, all of which are within sight of the Spanish coast across the straits of Gibraltar.

Tangier Morocco, top things to do and see.

An edge city, poised at the northernmost tip of Africa, just nine miles across the Strait of Gibraltar from Europe and overlooking both the Mediterranean and the Atlantic, Tangier is more than a destination, it is an escape, and the Interzone, as William Burroughs called it, has attracted spies, outlaws, outcasts and writers for centuries – men and women working out at the edge of literary forms, breaking through artistic borders.

This outlaw originality is what most astonishes when encountering the literary history of Tangier for the first time. Particularly in the past century, the results were some of the most incendiary and influential books of our time, the most prominent being Burroughs’ Naked Lunch and Bowles’ The Sheltering Sky.

This is a book that will capture the unconventional, multilayered story of literary Tangier and will be a must-have for travellers, armchair adventurers and literature buffs, particularly aficionados of the Beat generation writers and poets who made the city their home.